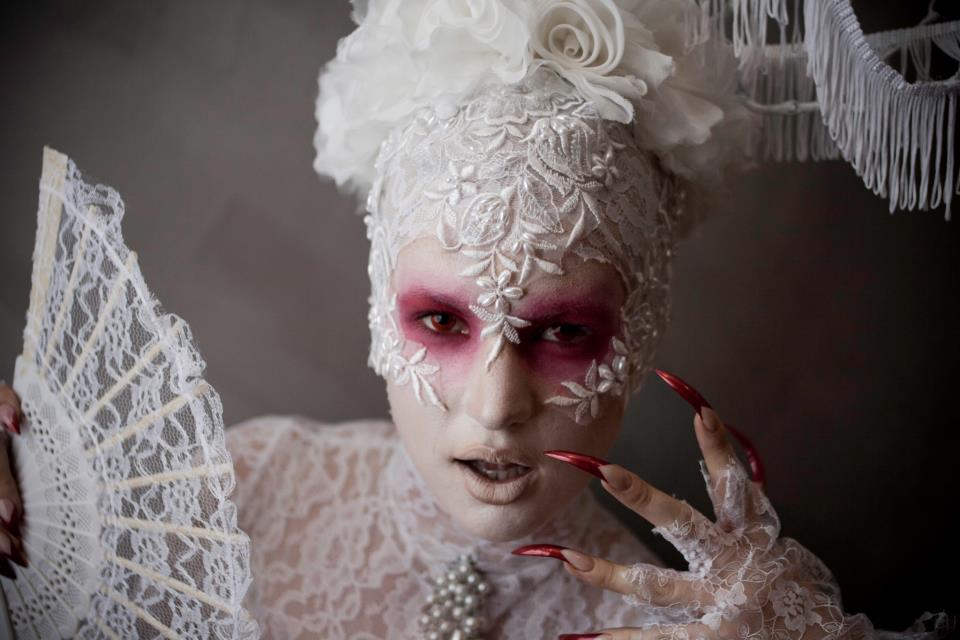 SOME OF MY LOOKS, SHOWS, SHOOTS & SHENADIGANS
FROM MY TRIP TO NYC IN 2012 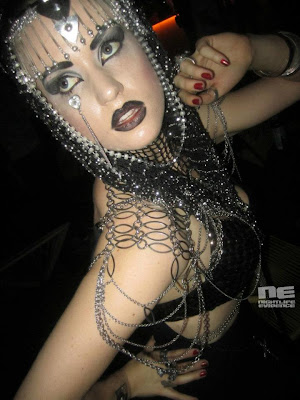 New Years Eve 2010-2011- I found myself perched on a giant amplifier, in front of a crowd of 11,000 people at the Falls Festival Tasmania...while Sian and I of V Dentatas flanked PEACHES as she boomed out the NYE countdown. (see the video here)
Followed by an epic Peaches DJ set also featuring the glamorous gothic stylings of my male twin and partner in crime Agent Cleave.

And so this year- he and I were left wondering- how does one match that?
So we got in touch with our buddy Ms Palmer and joined the circus that was:

In the epic warehouse/performance space that is "Revolt"- for one night it was a magical land of vice, trash and masquerade. Lavishly costumed punters were treated to a night of musical genius, performance, theater, poems, letters... Neil Gaiman seduced his audience and fans with his calm voice and magical words, while the lady of the night that is Amanda Palmer rocked the roof off. The night also featured amongst others The Bedroom Philosopher, The Jane Austen Argument, Mikelangelo and Saint Claire and the goddess that is MEOW MEOW! What a line up.
Agent Cleave and I thought what better way to bring in the new year in this trash-esque wonderland than to treat the audience to a gothic striptease of flying ponies. New capes in hand, thigh high PVC boots, corsets and latex horse heads- we created an audience interactive performance piece where ladies and gentelemen were piled up together in a trashy masked orgy that left us no other choice but to writhe amongst them and cough up blood all over ourselves.
Happy New Year indeed! 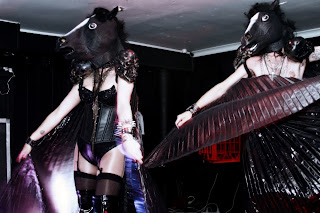 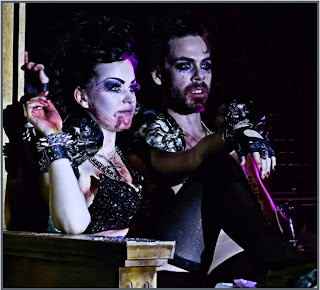 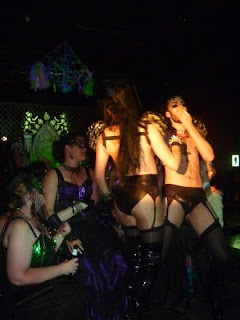 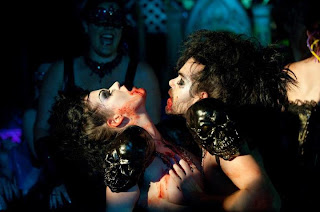 I dipped my toe into the wide world of mainstream to design for Australian popstar Delta Goodrem.
Hired by Sony Music, I designed the costumes for her dancers in her video clip "Sitting on Top of the World" and helped style Delta and assist her for the shoot. The highlight of the styling was Delta's final outfit: leather shorts and a $45,000 Balmain studded leather jacket.
I recently teamed up with Sony again for the 54th Annual TV Week Logie awards, where Delta performed at Crown Casino and was televised on the Nine Network.
The aesthetic; pastels and earth tones, English garden party/Ralph Lauren catalogue. I designed and sourced the costumes for her 35 dancers, 5 musicians and 2 backing vocalists. An epic project. 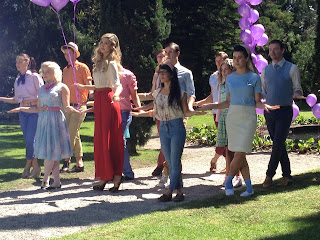 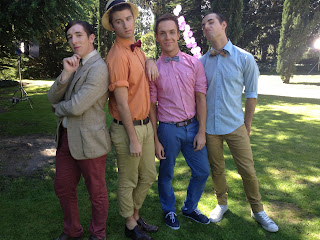 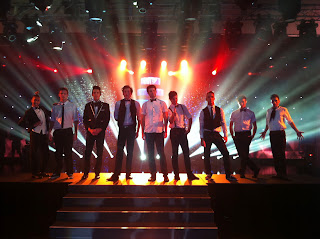 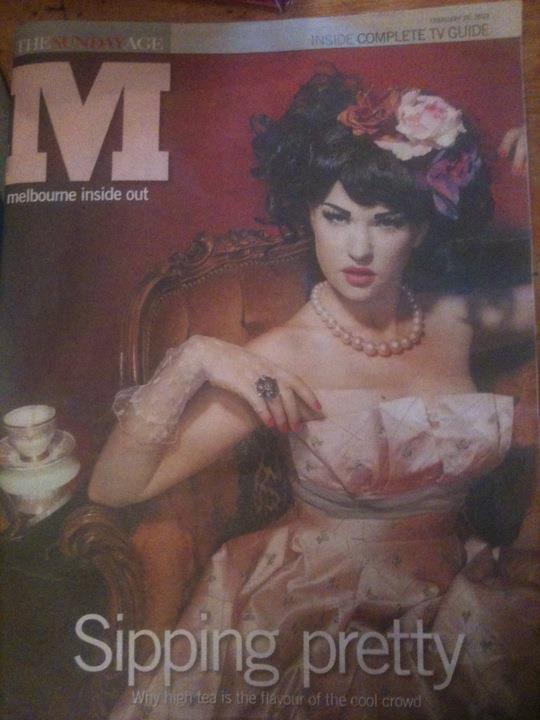 I recently collaborated again with the incredible Simon Schluter; photographer extraordinaire who spends a good deal of his time making celebrity portraits for Fairfax Media's magazines and newspaper feature sections. He has photographed the likes of Linda Evangelista and Dita Von Teese- the honour!

Simon is The Age newspaper's photographer- and we met in 2010 when he photographed me for the cover of the Sunday Life magazine after I won the Wycheproof Fashions on the Field. Check out some of his work here: http://www.simonschluter.com/
This time the shoot was to promote Mámor Chocolates & High Tea Szalón in Melbourne.
As well as modelling for the shoot- I was employed as the one woman band; hair, makeup and styling. The lot.
The photoshoot was featured in The Sunday Age "M" magazine, front cover and article.
The divine Hungarian goddess that is Madame Hanna Frederick is the master chocolatier who was not only generous to lavish us with a high tea and enough chocolate and cake that I could indulge in, but she has hired me as the face of Mamor chocolates. 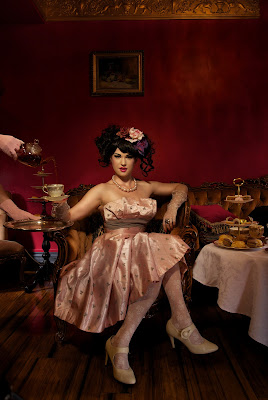 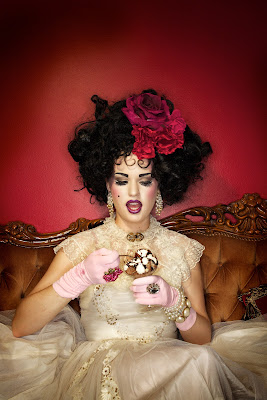 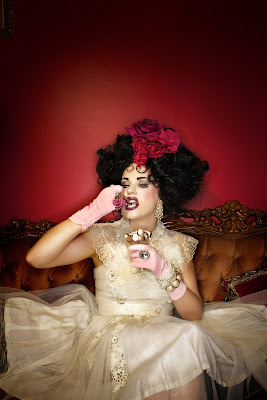 The following is a sneek peek from another shoot just a few days ago....I am to be the face of Mamor's new Mozart inspired chocolate! 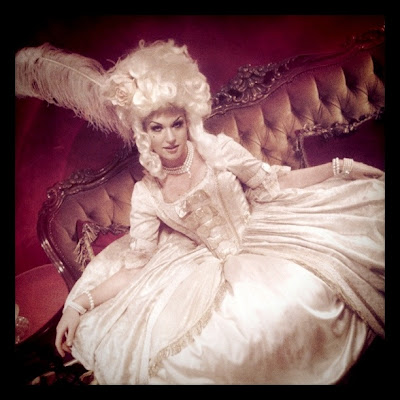 
The 7 Deadly Sins from Red Bennies on Vimeo.

A foray into the world of obscure fetishes, Agent Cleave and I created a performance piece as part of the “Sirens of Sin” burlesque and performance art event held at art deco nightclub Red Bennies.
Our sin was VANITY.
Our bodies encased in white lace.
Our faces masked.
A conceptual take on the vices of vanity, we explored themes of fetish culture, and created a homage in part to the great Leigh Bowery.
All costumes, styling and choreography by Jess Daly and Agent Cleave. 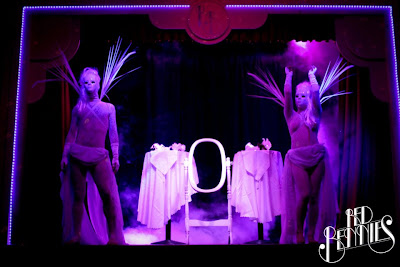 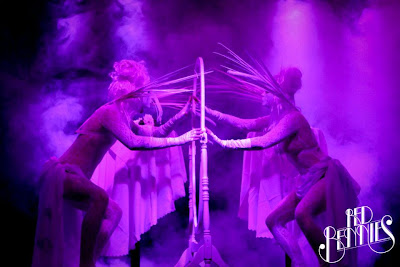 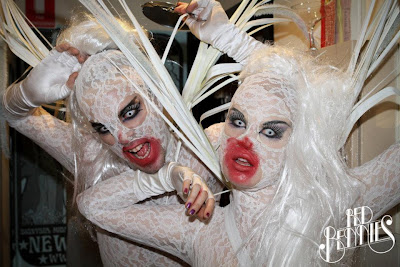 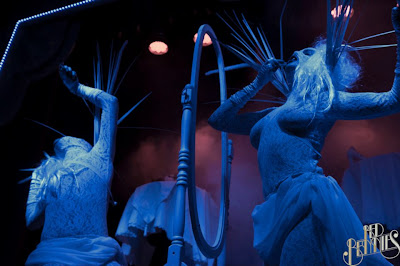 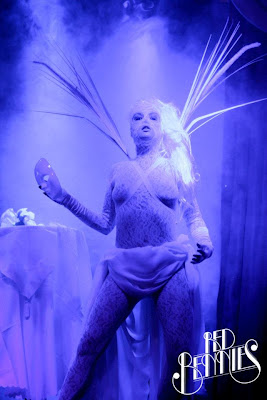 Caveboy Studios are a Melbourne team of photographers, artists, stylists, hair and makeup wizards who create the most breathtaking photographs and artworks.
I have collaborated with them before, and their images are second to none.
The following are a series of images from the studio of myself, shot in late 2011.
All the costumes I designed, including the red feathered mohawk headress.
The wonderful team that produced these images are:
Photography: Shami Kiely
Photoshop - Rob Kiely
MUA - Amanda Lissant-Clayton
Hair - Paul Pattihis
Assistance - Tina Harvey 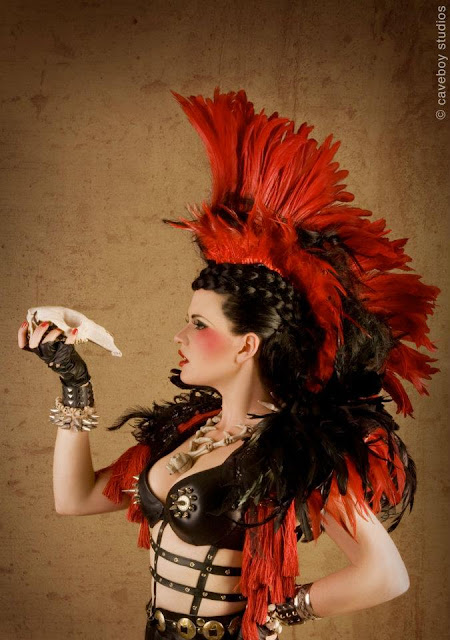 RUFIO!
My homage to Rufio, leader of the Lost Boys from the film "Hook" 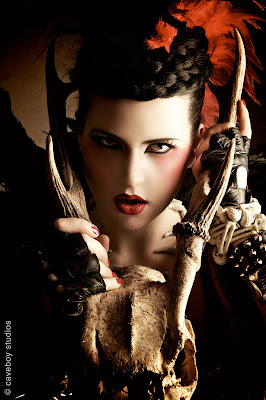 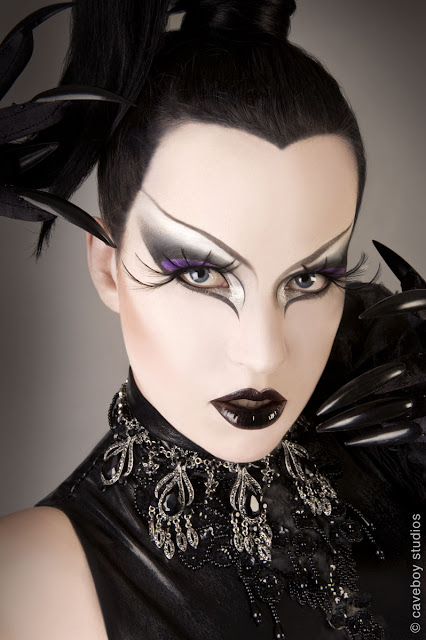 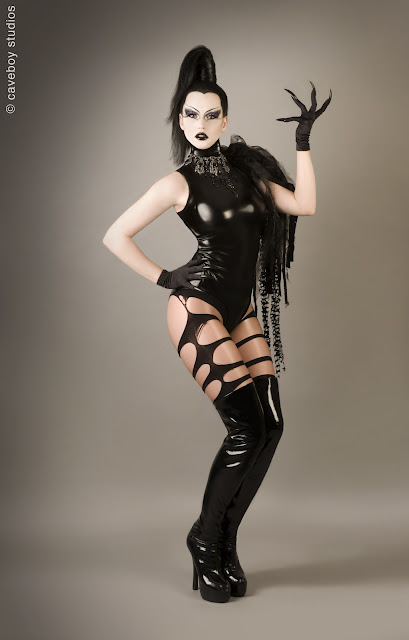 The latex suit was designed by myself and Agent Cleave, when we danced for for Peaches on her Australian east coast DJ tour in 2011. I styled the outfit to include a beautiful necklace and sequin appliques that I bought on a recent tour to New York; the gloves are beautiful beaded satin, with the glossy black talons attached. The look i wanted to achieve for the shoot was that of a sci-fi gothic barbie. 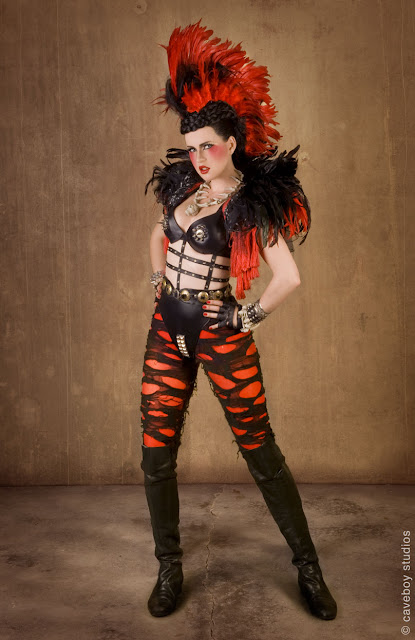 RUFIO: The mohawk I made as a separate headpiece, with 2 rows of feathers as well as sections of synthetic black hair. To finish off the edges were added weaves of long plaits of black hair. The collar is a costume piece from my divine workplace Rose Chong Costumes ( a Fitzroy fashion and costume institution) which I added extra sequin appliques and feathers to. The vinyl leotard leotard I created myself while on tour with Peaches in Berlin in 2011- the hunt for studs for the bra and knickers providing a challenge to hunt down!

Two pics of the babe himself; Rufio: 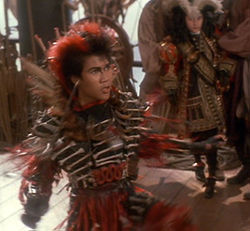 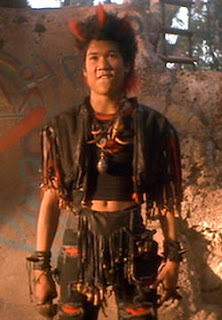 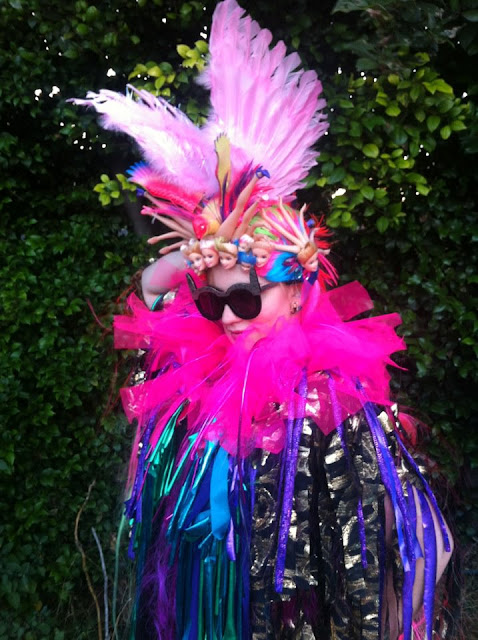 Wearable art is one of my favourite styles of costume and fashion to create. I made this mutant barbie headress & rainbow jellyfish ensemble last year, inspired by the many ways to subvert Barbie's body and combine with my love of hair sculpture. The shoulder piece is designed to dance in as all the jellyfish tendrils fly about.
The outfit is modeled here by an incredible costume maker, seamstress extrordinare and all round fabulous sparkly Melbourne babe Peri Jenkins. Peri is is responsible for some of the more epic costumes seen at the Australian Ballet, from feathered wonderness to leather armor- she constructs outfits the rest of us only can only dream of in our minds. She has recently joined my sewing team on my two current projects and I may owe her my life.
Posted by Jess Daly at 5:48 PM No comments: 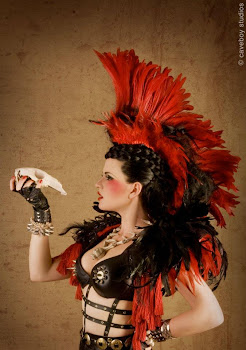